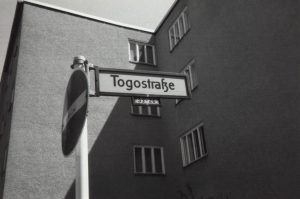 „Kintopp in Africa“ is inspired by the African quarter in Berlin-Wedding and a 16mm animationfilm-fragment from the 30ties of 20th century. B/W shots from the quarter, which was founded in times, when Germany was holding four colonies in Africa, are combined with collages, animations and texts about the colonial past.

In 1931 the German traveller Hans Seligo wrote in his book „The changing Africa“:
„Since 50 years ago in Europe‘s capitals on green tables and maps Africas protectorates had been randomly marked and divided under the pretext of using the continents empty spaces for the excess population of Europe, today we find ourselves confronted with a new and more objective division of this continent.“

Seligo did not write:
Today we use Europe’s empty spaces for the settlement of the excess populations of Africa.